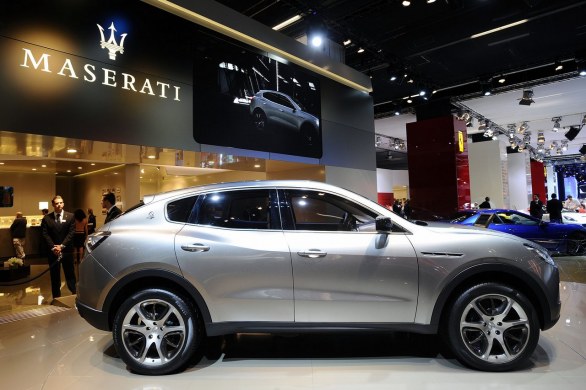 The first production of Maserati SUV will debut in March 2016 at the Geneva Motor Show.

The first production of Maserati SUV will debut in March 2016 at the Geneva Motor Show. It is still unknown how will look the new model, but most likely it will be significantly different from the concept SUV Kubang, shown four years ago.

However, the head of the Italian premium brand Harald Wester said that the new model in the Levante 100% will consist of the components of Maserati, and with its production units and units of other brands belonging to the group Fiat Chrysler Automobiles, will not be used. Earlier it was assumed that crossover will be built based on the Jeep Grand Cherokee, but later the company decided to use the platform for Levante models Quattroporte and Ghibli. One of the modifications Levante equipment is the hybrid power setting, which will be used in the production models at the beginning of 2018. In the current Frankfurt Motor Show was demonstrated its first crossover and Bentley Jaguar. Bentley Bentayga six-liter W12 is equipped with a capacity of 608 horsepower with twin turbochargers, which works in tandem with an eight "automatic" ZF. Enjoy this summer with RepoKar

Jaw-dropping deals this Spring at RepoKar